ONE: The first Congress

I remember the first time ever that my partner Ximena Tobi and myself attended an event related to Semiotics. It was 1994, we were students at the University of Buenos Aires, and we travelled 800 km -by coach, of course- to attend the Fourth National Congress on Semiotics at the University of Córdoba, Argentina. Our brains were happy, boiling with ideas from semiologists, writers from the British Cultural Studies, many local people who were thinking about communication and semiotics… The big star was Eliseo Verón, coming from Paris to talk to students and professors, who adored him. There were some other stars too: Marc Augé (and his popular theory of the “non-places”) and Beatriz Sarlo, an Argentinean writer who had published many interesting articles about language and communication. We had to listen to Verón from the door, he had such a big audience. He talked about his theory for analysing social discourses and everyone was delighted. “He is such a great semiotician,” was the general phrase. Nevertheless, there were some other things that made us think that Semiotics were a strict area, only accessible to those who had the key to it… The poor interpreter who was trying to translate Augé’s concepts into Spanish was really struggling; she didn’t know what he was talking about. We felt sorry for her; although Augé didn’t speak Spanish fluently, he understood it fully and was constantly correcting her. Beatriz Sarlo was enthusiastic about the first versions of  SimCity: she had started playing the game recently and couldn’t give it up. People started to leave the room saying things like “this is not serious”; “she used to be good, but she has lost it…” We stayed until the end; although we weren’t great fans of videogames, we sensed there was something there. The proto-ideas on virtual communication and semiotics had entered her brain, but few people understood it. There were less important participants (at least, considered like that), like Pablo Alabarces, who offered a very interesting and funny dissertation about how we watch football on TV. Of course, he told some jokes about Argentineans, Brazilians and the English. This later gave birth to a book with a very funny name: Cuestión de Pelotas (literally, A question of Balls). Again, general indignation: “That’s not Semiotics”. We left the Congress with the feeling that some changes were needed if we wanted to apply semiotics and use them for something more that a good conversation among the “initiated”.

We knew about this group some time ago, thanks to Gareth Lewis from Space Doctors. Gareth contacted us (due to a reference from Malex Salamanques, who remembered the first research we did with them in late 2009) for a new and very interesting project. As we hadn’t met Gareth in 2009, we looked at his profile in LinkedIn and discovered Semiotic Thinking Group. We immediately joined it, in special because we liked the “mix” in it: people from different disciplines, sharing a common way of thinking, a similar point of view on the activities they do.

And there was it: the idea of Semiofest, a Celebration of Semiotic Thinking. We were immediately tempted and decided to attend. Ximena could not make it this time (Buenos Aires is too far away from London) but I was able to attend, as I have been living in Spain for the last decade. I have just returned from London -this time by plane, thank God- with my brain boiling with great ideas from academic semioticians, practictioners and people who do both things. The general feeling of sharing our points of view and experience was in the air; you could feel it during the two days, and also in the moments we shared meals and networked. All this made this experience unique.

On May 25th we met Pavla Pasekova when we went through the registration process. She was as nice and as efficient as she had been during the previous organization.  As we had talked a lot among ourselves, there was no need (and no time) for the interactive icebreaker, so after the great presentation by the Organizing Commitee (Chris Arning, Lucía Neva, Hamsini Shivakumar and Sandra Mardin -who were there-  and  Dr. Kishore Budha), we listened to Professor Paul Cobley. 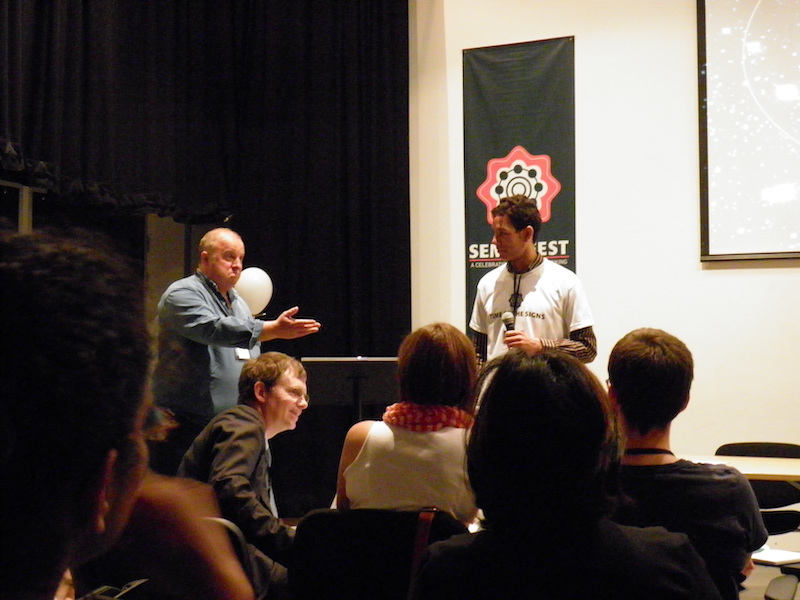 After some networking, we went back to listen to methodologies and tools from around the world. It was the turn of Maryam M. Daroodi to talk about Semiotics of Colour; she also invited us to take part in her research, which is available here. 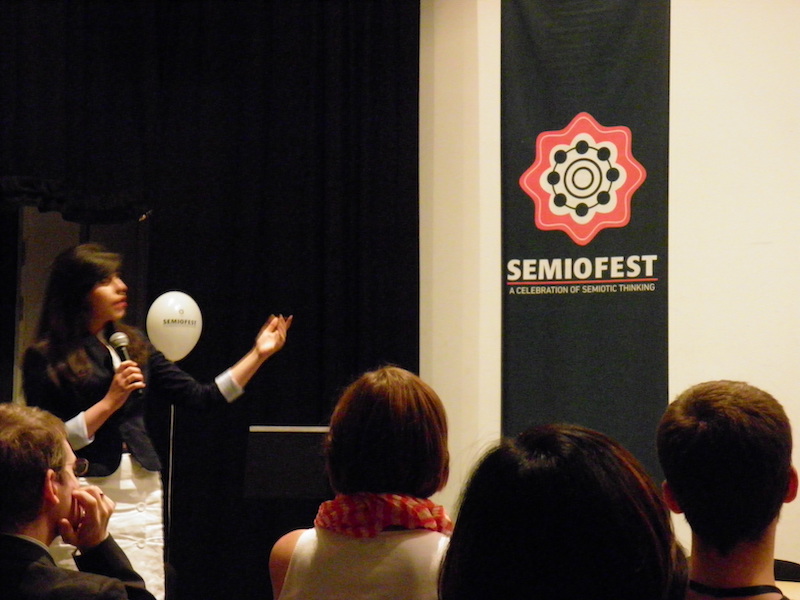 Paolo Odoardi talked about Semiotics and Social Marketing, through the case of CIBUS, International Food Exhibition. 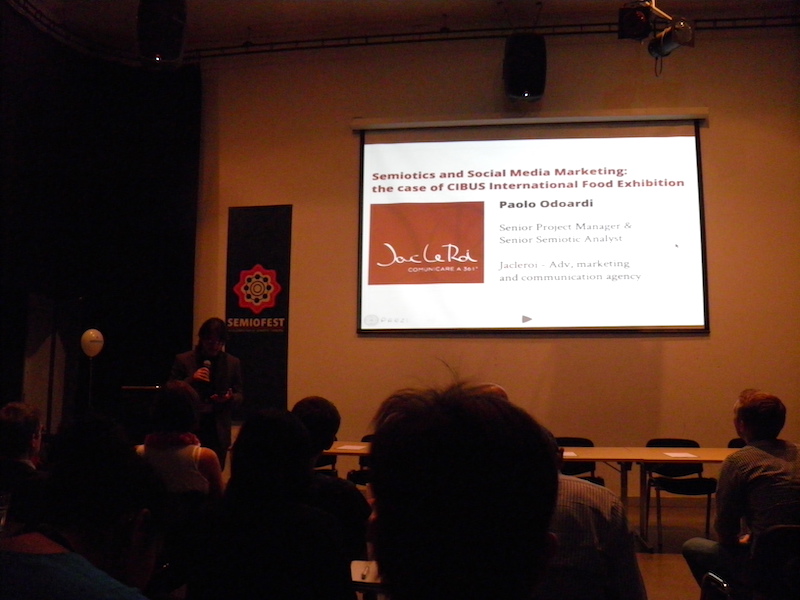 Next, we heard about an interesting experimental tool for commercial market: Semiotic Index. It helps us to measure the meaning of ads. It was presented by Krzysztof Polak and developed by himself and his partner, Marzena Zurawicka. 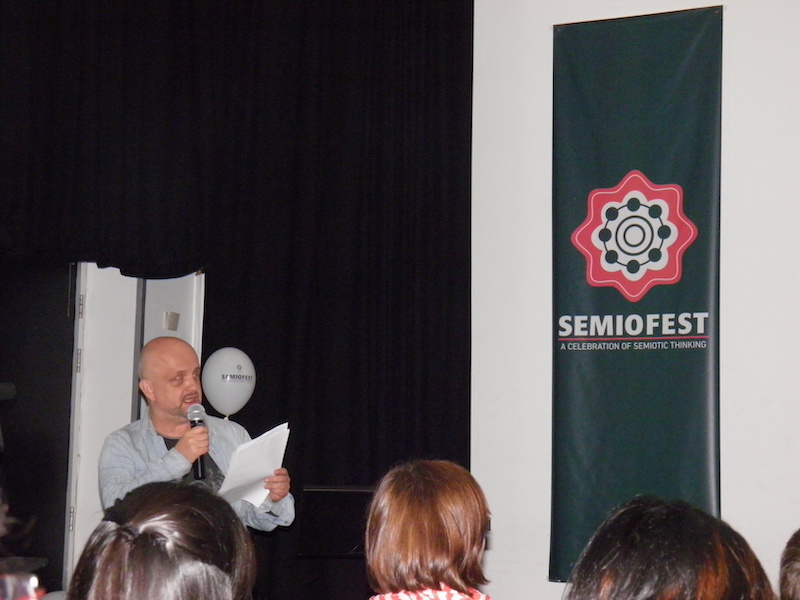 Krzysztof Polak and his Semiotic Index.

Charles Leech (with that great rythm people from North America have!) let us know about North American Semiotic Toolbox. 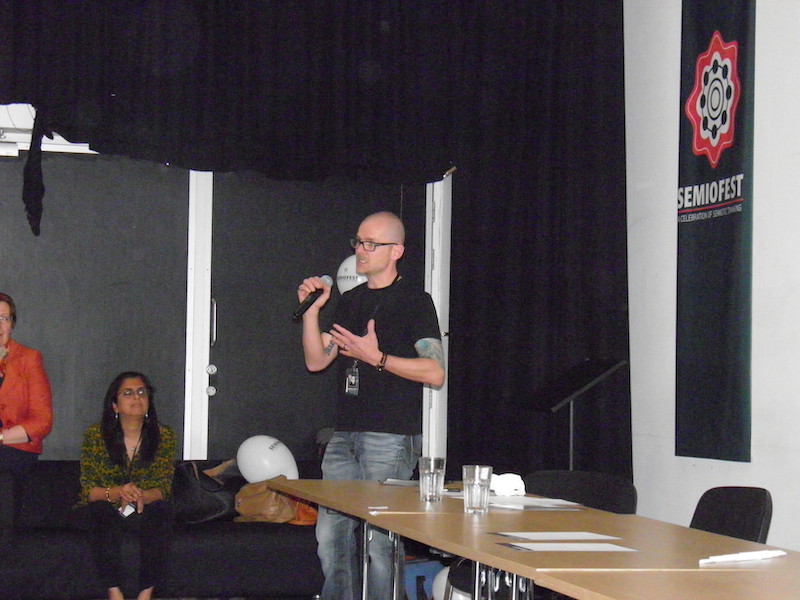 The co-creation brand task (about Press Freedom) was quite an experience. I think we all enjoyed it very much and it would have been really great to let each group share their views on the posters we analised (but time waits for no one and we were in England…) 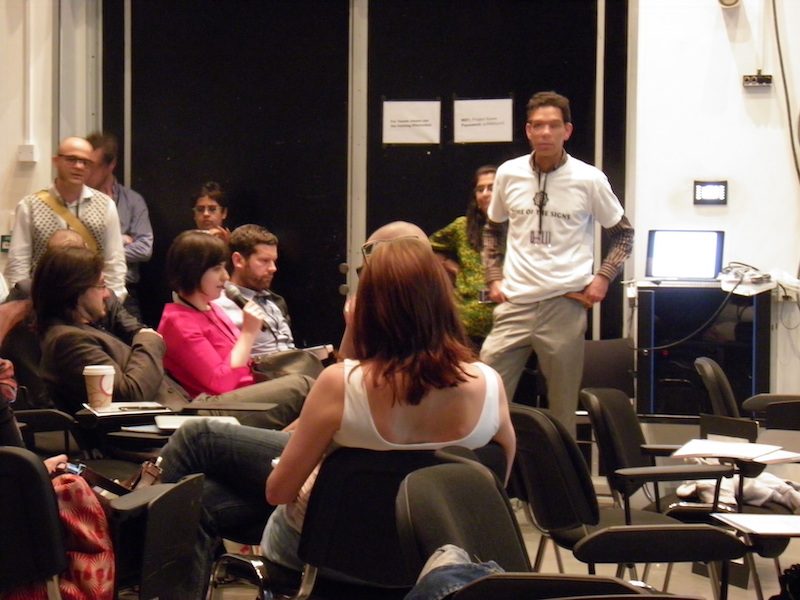 Then we had lunch at Westbourne Studios. The meat eaters went first and the non-meat eaters (at least for that day, as it was my case) had to wait for the second shift, but we went on talking and netwoking. I think it was worth waiting… the food was tasty and fresh. After lunch, we had the first Semiofest panel. It was (of course!) on How to Become a Semiotician. The speakers were Chris Arning, Kaie Kotov, Massimo Leone, Kristian Bankov and Dr. Alex Gordon. It was really interesting, and I had the feeling that the sensation we had in 1994 about doing something for extending semiotics to the “real world” had already started… 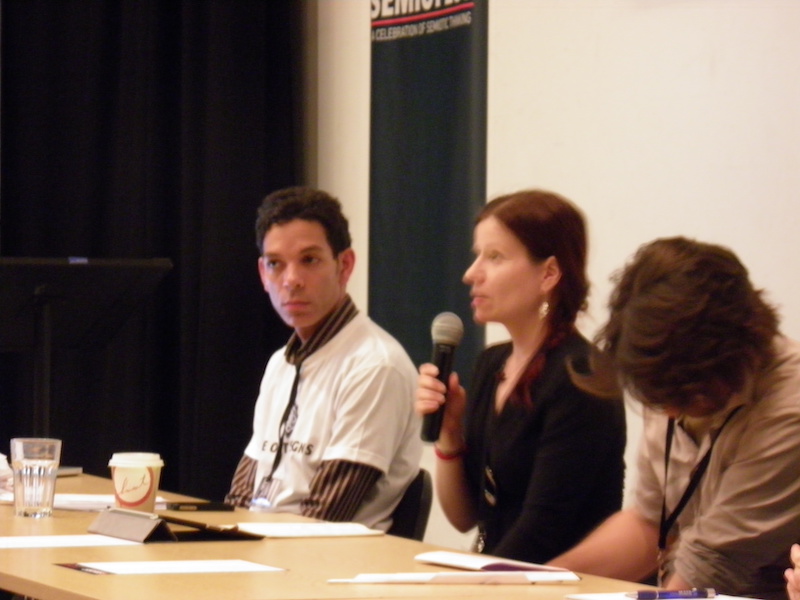 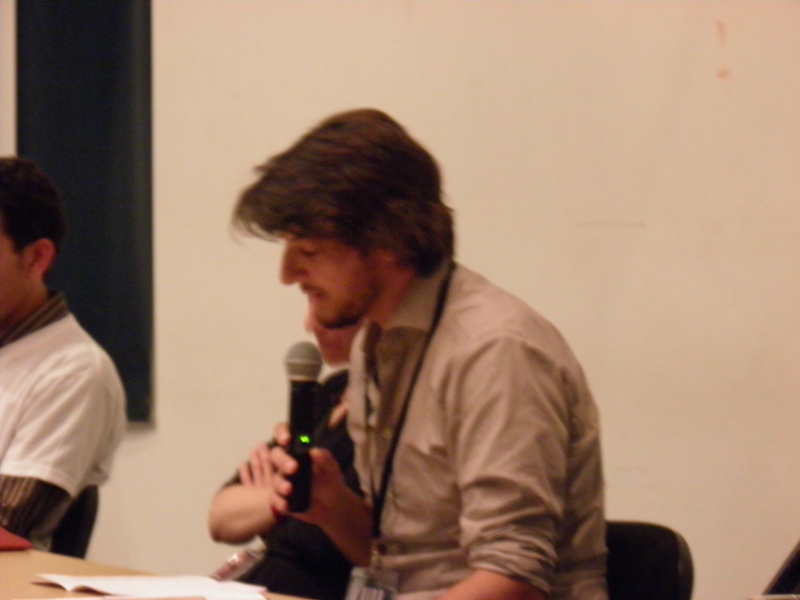 Massimo Leone and his funny and true Decalogue to become a Semiotician. 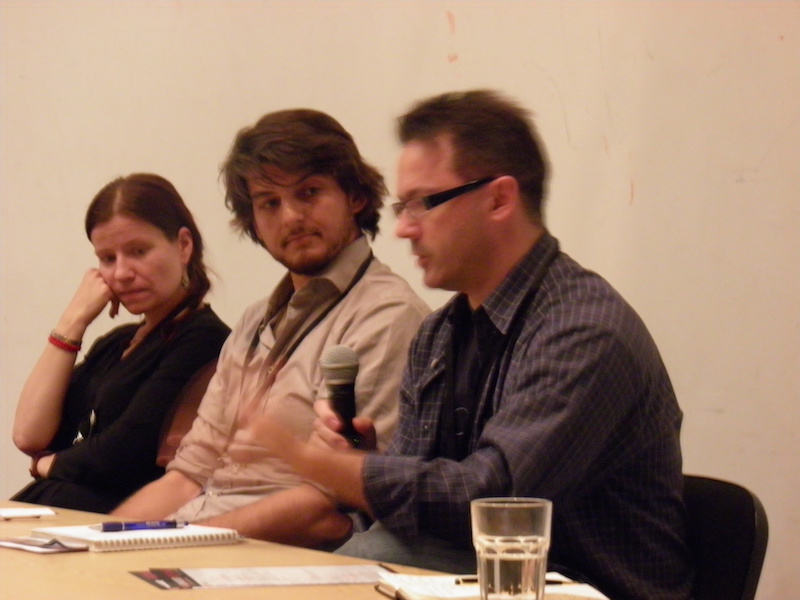 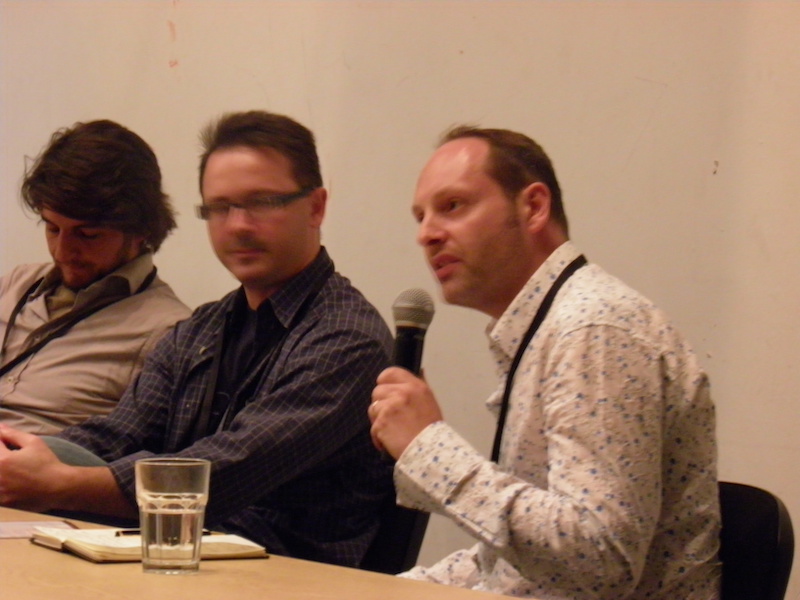 Dr. Alex Gordon reflecting on the features of a semiotician.

The artist Thierry Mortier made us think abut Semiotics as Art; he started from the idea of transforming noise into information. It was really inspiring and we all probably agree with what Malcolm Evans said: it was a beautiful way of expressing a shared view on the world (but of course, you should have heard it from him…) Chris Arning went on with Free-Style semiotics, with a great short film  in which he was standing round Oxford Circus. Suddenly, we understood his tweet from some days before:

We also had some tea and coffee and networked. The last part of the first day of Semiofest included some more analytic techniques and methodologies from the world. We listened to Dr. Janis Wilson on Archetypology; Ricardo Monteiro talked about Semiotic Evaluation of Rethorical Strategies in Ads. Gabriele Ferri shared his views on Urban Games and Multi-Cultural Dialogue with some face-to-face experiences in Italy, while Kristian Bankov and Dimitar Trendafilov talked about Commercial Semiotics and the case of the New Bulgarian University. Massimo Leone reflected on Semiotics and Innovation whileGabriela Pedranti (ahem, that’s me) talked about Eliseo Verón’s theory for Analysing Social Discourse. By the way, the presentation can be seen here. Finally, Sandy Santra talked about Semiotics and Artificial Intelligence. We had a quick wrap-up and we went together to have dinner. The feeling was so different from the vibe in 1994, even if I talked about Verón’s theory… 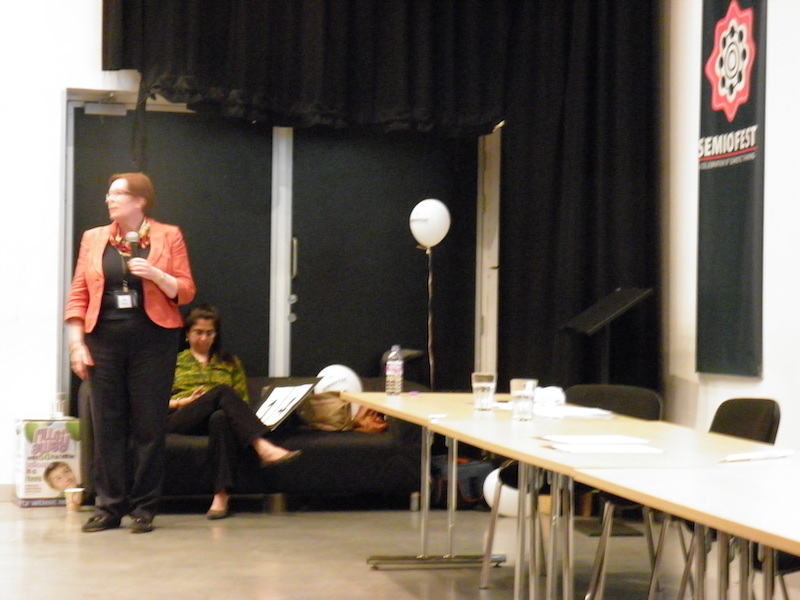 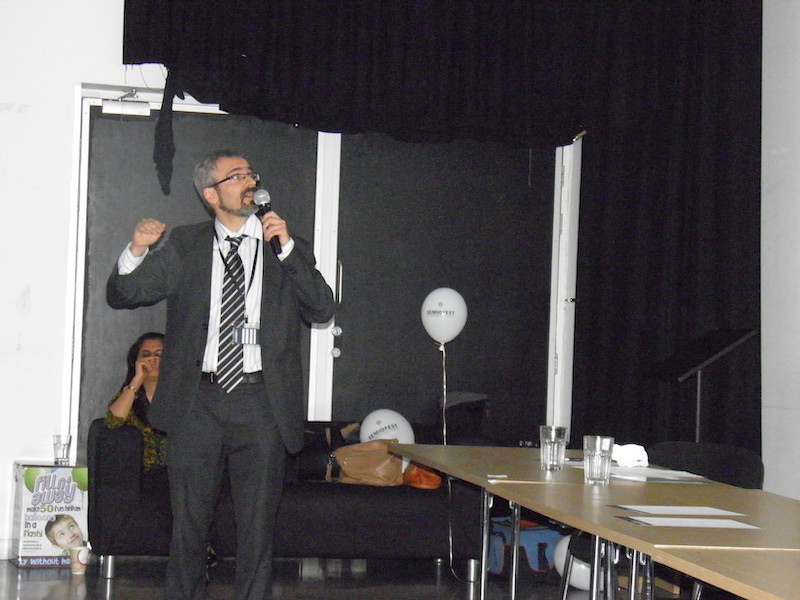 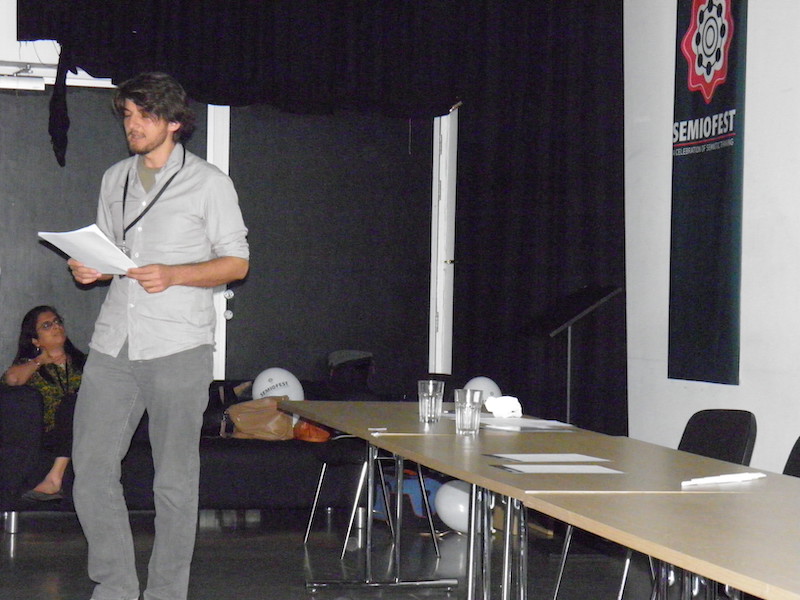 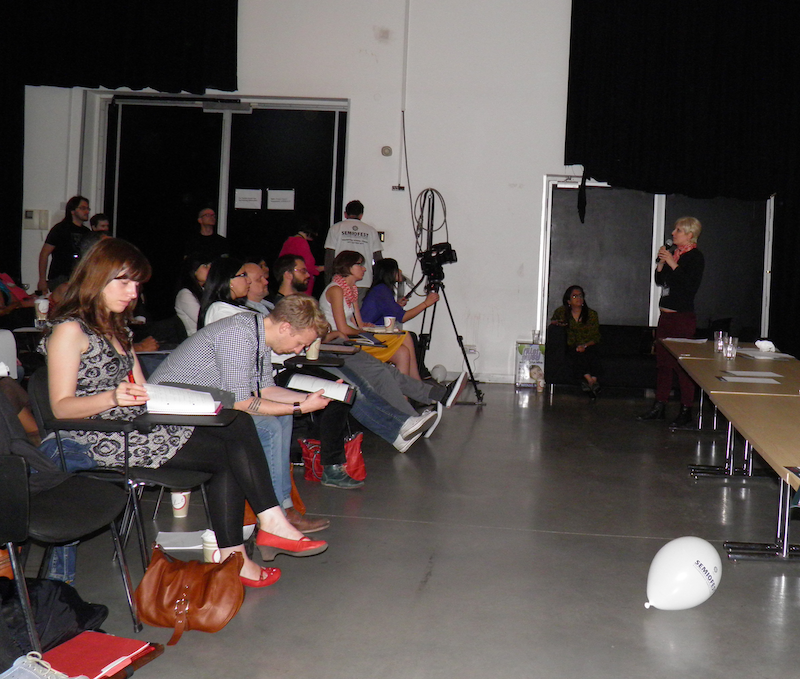 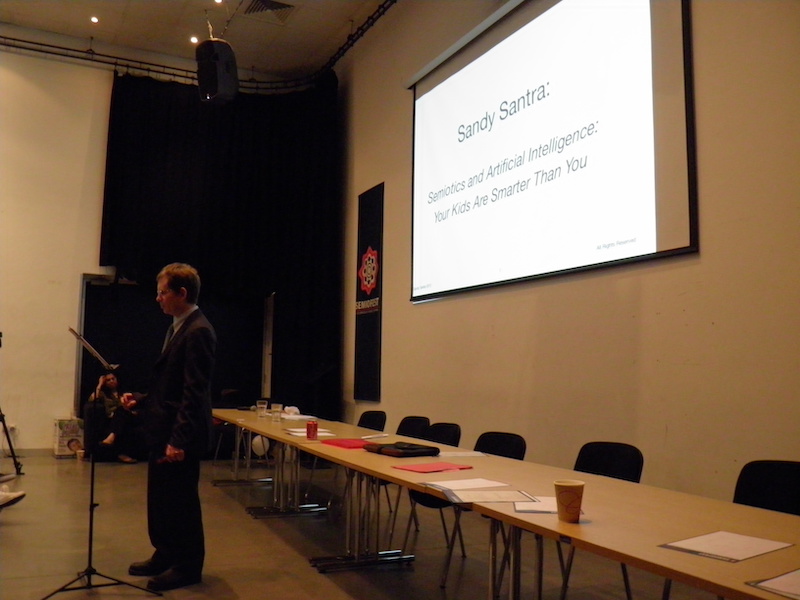 As there was a lot of activity on Twitter, below the text you have a Storify on the highlights of the second day.

People talking were: Mark Taylor (Pimping Semiotics), in the first keynote speech of the day. Then, in the 15-minutes presentations (Showcase Analytic Techniques) we listened to Ajitesh Ghose (Computational natural language processing: An integrative quali-quant approach); Martha Arango (From local to global and back to the original); Lucía Neva & Malex Salamanques (Looking through: A conversation on Graphic design, Materiality & Semiotics).  After a short break, we listened and talked to Tim Stock, Anne-Flore Maman Larraufie and Kay O’Halloran (remotely from Singapore, what unluckily made it difficult to find out all about the interesting tool they are developing. You can find more about it here: http://multimodal-analysis-lab.org/).

After lunch, there was a very interesting panel discussion on Demonstration of Value, Questions of ROI. (In toher words, figuring out how to connect with clients and convey what semiotics can do for them in the right way). The panellists were Hamsini Shivakumar, Malcolm Evans, Graeme Smith and Vladimir Djurovic.

The last panel was excellent: we had the feeling that it should have gone on for hours! It was about Visual Semiotics and the World of Design. We listened to and discussed with Lucía Neva, Malex Salamanques, Luca Marchetti, Fredrik Goffhé, Michael Bensigher-Colton and  Rob Swan.

Semiofest was an open space,  where everybody was willing to learn and share. The final feeling is that -as Chris Arning put it- “This is not an end, it’s the beginning of something”. If we recognise ourselves as cultural analysts and “map makers”, who knows where can we head from now on? It was some needed fresh air and a new attitude towards semiotics and communication: as somebody said, we have moved from “semiotics” to “semiotic thinking”. There is no doubt: after 18 years, we’ve come of age. 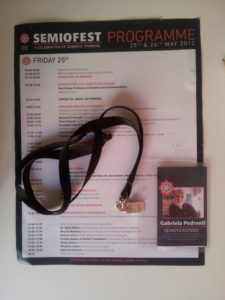 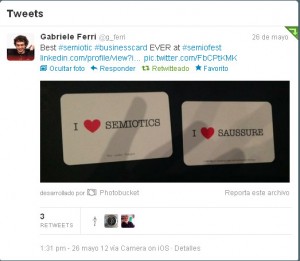 Great tweet from Gabriele Ferri (whose card is it?)